You are using an outdated browser. Please upgrade your browser to improve your experience and security.
Elizabeth H. Blackburn
Article Media Additional Info

Join Britannica's Publishing Partner Program and our community of experts to gain a global audience for your work!
External Websites
WRITTEN BY
Kara Rogers
Kara Rogers is the senior editor of biomedical sciences at Encyclop?dia Britannica, where she oversees a range of content from medicine and genetics to microorganisms. She joined Britannica in 2006 and...
Alternative Title: Elizabeth Helen Blackburn

Elizabeth H. Blackburn, in full Elizabeth Helen Blackburn, (born Nov. 26, 1948, Hobart, Tasmania, Austl.), Australian-born American molecular biologist and biochemist who was awarded the 2009 Nobel Prize for Physiology or Medicine, along with American molecular biologist Carol W. Greider and American biochemist and geneticist Jack W. Szostak, for her discoveries elucidating the genetic composition and function of telomeres (segments of DNA occurring at the ends of chromosomes) and for her contribution to the discovery of an enzyme called telomerase.

Britannica Explores
100 Women Trailblazers
Meet extraordinary women who dared to bring gender equality and other issues to the forefront. From overcoming oppression, to breaking rules, to reimagining the world or waging a rebellion, these women of history have a story to tell.

In the early 1970s Blackburn earned a bachelor’s and a master’s degree in biochemistry from the University of Melbourne. She then enrolled as a graduate student in molecular biology at the University of Cambridge in England, where she worked in the laboratory of British biochemist Frederick Sanger. At Cambridge Blackburn studied the nucleic acid composition of bacteriophage ?X174 and became familiar with techniques of DNA sequencing. She received a Ph.D. in molecular biology in 1975, and that same year she began her postdoctoral research in the laboratory of American cell biologist and geneticist Joseph Gall, at Yale University in New Haven, Conn. Gall’s research was concerned primarily with the structure and replication of chromosomes, and Blackburn followed his lead, investigating the chromosomes of a protozoan called Tetrahymena. She sequenced the DNA of the organism’s telomeres and thereby discovered that telomeres are composed of short repeating segments of DNA.

In 1978 Blackburn became an assistant professor of molecular biology at the University of California, Berkeley, and continued her investigations of the telomeres of Tetrahymena. She became increasingly interested in the function and maintenance of the repeated segments of DNA that make up the ends of chromosomes. In 1980 Blackburn met Szostak, who was also studying telomeres and who was intrigued by Blackburn’s research. The two began a collaborative effort to understand telomere function, using both yeast and Tetrahymena as model organisms for their investigations. In 1984 Blackburn and Greider, who was then a graduate student in Blackburn’s laboratory, discovered telomerase. Their subsequent studies revealed that telomerase plays a fundamental role in maintaining chromosomes because it can add DNA to telomeres, which shorten following cell division and are the primary determinants of cell life span.

Blackburn remained at Berkeley until 1990, when she became a professor in the department of biochemistry and biophysics and in the department of microbiology and immunology at the University of California, San Francisco (UCSF). In 1993 she earned the additional title of chair of the department of microbiology and immunology at UCSF. Blackburn’s later research involved further investigation of the genetic composition and cellular functions of telomeres and telomerase, as well as studies on the interactions of these cellular components and their roles in cancer and aging.

History at your fingertips
Sign up here to see what happened On This Day, every day in your inbox!
Thank you for subscribing!
Be on the lookout for your Britannica newsletter to get trusted stories delivered right to your inbox.
Elizabeth H. Blackburn
Quick Facts 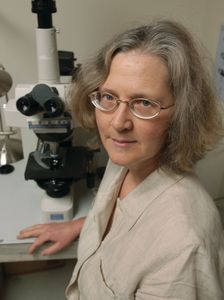