You are using an outdated browser. Please upgrade your browser to improve your experience and security.
Danica Patrick
Article Media Additional Info

Britannica Quiz
Indianapolis 500
Why is the Indianapolis Motor Speedway also known as the Brickyard?

Patrick’s racing career began with go-karts in her hometown of Beloit, Wisconsin, at age 10. At age 16, after national success in go-karts, Patrick left high school to race Formula Fords and Vauxhalls in the United Kingdom. She placed second in the 2000 Formula Ford festival, the best-ever finish for an American in that spawning ground for future professionals.

Patrick returned to the United States in 2002 after being signed to her first U.S. Indy-car racing contract by former Indy driver Bobby Rahal. She was then promoted to Toyota Formula Atlantic open-wheel cars. Although she never won in that series, she finished third in the drivers’ overall ranking in 2004, which led to a chance to qualify for the Indianapolis 500. Three other women—Janet Guthrie, Lyn St. James, and Sarah Fisher—had previously qualified for the Indy 500, the most prestigious auto race in the United States. In her first appearance at Indy, in 2005, Patrick set the fastest lap in practice (229.88 mph [369.956 km/hr]), but she could not duplicate this feat during official qualifying. She became the first woman to lead the classic race (three times for a total of 19 laps) and eventually finished fourth. She was named Rookie of the Year for 2005 and was voted Indy Racing League (IRL) Most Popular Driver in 2005, 2006, and 2007.

Patrick began racing with the Andretti Green Racing (AGR) team in 2007. On April 20, 2008, in her 50th start in the IRL, Patrick secured the first big win of her career—the Firestone IndyCar 300 race at the Twin Ring Motegi circuit in Motegi, Japan. Patrick, driving a Dallara-Honda for AGR, skillfully avoided taking a late pit stop in the race and finished 5.86 seconds ahead of former IRL titlist Hélio Castroneves of Brazil to become the first woman to win an IndyCar championship event. Patrick’s victory, and her sixth-place finish in the season-long drivers’ championship, silenced many critics who, in light of her lucrative merchandising and endorsement pursuits, had wondered at times whether she was just a marketing phenomenon.

Beginning in 2010, Patrick raced a partial season in NASCAR’s lower-tier Nationwide Series in addition to continuing to compete in IndyCar racing. In August 2011 she announced that she would move to NASCAR full-time in 2012 and would participate in both Nationwide and Sprint Cup (top-tier) races. Patrick won the pole position for the 2013 Daytona 500, becoming the first woman to start a Sprint Cup race from the pole. She also became the first woman to lead a lap in that race, and she finished in eighth place. In 2017 she announced that she would be retiring after the following year’s Indy 500. In that event she crashed during lap 68.

Patrick cowrote several books, including the memoir Crossing the Line (2006) and Pretty Intense: The 90-Day Mind, Body, and Food Plan that Will Absolutely Change Your Life (2017). 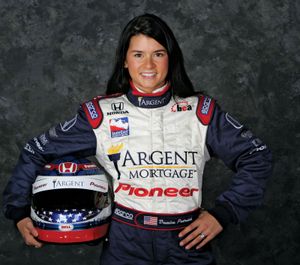